Sam Durant, Propaganda of the Deed. 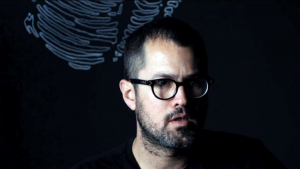 Born in Puebla (Mexico) in 1974, he splits his personal and professional life between Italy and Mexico. Since 2012, he has been carrying on an editorial project called Tiempo Muerto, which has been displayed at Kunstraum München, MUCA-Roma of Mexico City,  Tranzitdisplay in Prague, and within the group showAltars of Madness (2013) hosted at Casino Luxembourg and Confort Moderne in Poitiers.

His art investigates the relationship between systems of representation and affection and, analogously, between institutional know-how and insurrectional knowledge. With his actions, interventions, and archive manipulation, the artist aims to generate tension between institutions, the practice of art, and the social field, drawing away from mere semantics by producing programs that act directly on organic, social and financial bodies.

For the exhibition closing his 2013 DATABASE residence, Juan Pablo Macías featured the video he directed at Campocecina (Apuan Alps). The artist chose to visit these places to develop a dissertation on the cosmos and on culture through a series of woodland hikes.

From the 23rd to the 27th of October 2014, two of the artist’s pieces will be displayed at the stand shared by DATABASE and Galleria Duomo at MIA&D, the Singapore international photography and design fair hosted at Maria Bay Sands.

A number of his works are available for viewing and purchase at the DATABASE showroom within Palazzo Forti in Via Buonarroti 1, Carrara.